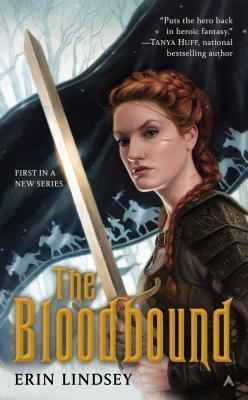 Of all those in the King of Alden’s retinue, the bloodbinders are the most prized. The magic they wield can forge invaluable weapons, ones that make soldiers like Lady Alix Black unerringly lethal. However, the bloodbinders’ powers can do so much more—and so much worse…

A cunning and impetuous scout, Alix only wishes to serve quietly on the edges of the action. But when the king is betrayed by his own brother and left to die at the hands of attacking Oridian forces, she winds up single-handedly saving her sovereign.

Suddenly, she is head of the king’s personal guard, an honor made all the more dubious by the king’s exile from his own court. Surrounded by enemies, Alix must help him reclaim his crown, all the while attempting to repel the relentless tide of invaders led by the Priest, most feared of Oridia’s lords.

But while Alix’s king commands her duty, both he and a fellow scout lay claim to her heart. And when the time comes, she may need to choose between the two men who need her most…

I enjoyed this book quite a bit. Erin Lindsey did a great job world building. I really like the main character Alix. She isn’t afraid to speak her mind and tries to stay true to her values. Although sometimes she drives me crazy with the choices she makes. Like not being honest about who she’s in love with.

I had a hard time putting this book down. I was always wondering what was going to happen next. There was a lot of treachery in this book which to me pretty much always makes for an interesting story. Having the crown prince try and steal the throne from his brother who is the king in the middle of a war makes you not want to put the book down. There are so many questions raised by this issue when you start reading the book and thankfully you get answers at the end! It will be interesting to see how these characters grow throughout the series.

The next book in this series is already out thankfully so I didn’t have to wait long to see what happened next!